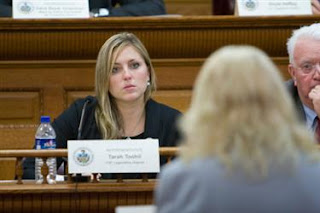 In the last election a video attacking State Representative Tarah Toohil surfaced on YouTube.com. in a desperate attempt to discredit her.

Reports are coming out that an investigation into a new video threatening Toohil over a possible vote dealing with marijuana legislation.

The 85-second video being investigated used the slogan of a group of hackers called Anonymous: "We are Anonymous. We are Legion. We do not forgive, we do not forget. Expect us."

A woman speaking with an English accent says in a voice over the "legions" were disappointed by Toohil's response to earlier videos that allegedly showed her smoking a bong. The most recent video said she must support decriminalizing marijuana or it would expose her secret, the Inquirer reported.

"Everyone has secrets. Please do not give us a reason to expose yours," the voice over said.

Revenge is never a reason to enter a race.  According to this Philadelphia Inquirer article written by Angela Couloumbis from their Harrisburg Bureau former Representative Todd Eachus decided to do just that.

State House Democrats, too, saw an opening. Toohil, after all, had unceremoniously defeated then-Majority Leader Eachus in 2010. Bitter over the loss, Eachus raised money to help Young's campaign, according to three Democrats involved in last year's races. At Eachus' urging, the House Democratic Campaign Committee spent about $100,000, just days before the Nov. 6 election, to air a tough ad - featuring photos of Toohil from the bong video, as well as the camel photo.

The decision to run that ad was controversial, with some Democrats arguing that it crossed the line of political decency - and wasted precious resources on an unwinnable race.

Speculation during that election centered on whether another person who worked for Eachus was actively involved in the behind the scenes efforts to discredit Toohil.  That person is working for a State Representative from Northeast Pennsylvania.

State Police have been interviewing friends as well as other House members over any role Rep. Nick Miccarelli (R., Delaware), former boyfriend of Toohil, may have played.  To date no charges have been filed against Miccareli.