Gangs and Graffiti- A Wakeup Call For Hazleton City Council 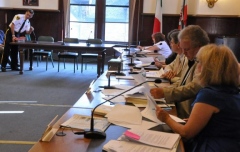 On July 11,2012 Hazleton Police Chief Frank DeAndrea introduced Ordinance 2012-19 defining and prohibiting graffiti and providing for removal and penalties for violations in the City of Hazleton. The top crime fighter in the City asked the legislative body for a tool to deal with graffiti which signals gang territory and was put on HOLD.

In this Standard Speaker article written by Sam Galski Councilwoman Jean Mope questioned the chief on provisions in the ordinance.  She wanted to know by penalizing the property owner for non-removal of graffiti would he be "fining the victim."

"I don't think it's right to victimize the victim over and over again," Mope said, adding that the written proposal would create an additional expense for owners of multiple properties.

What Ms. Mope is missing is who is the real victim here.  Is it the property owner who fails to remove the graffiti or the children who are enticed by the gangs for recruitment day after day?  This law will preven the victim from becoming the victim again by forcing removal of the graffiti according to experts.

Do a Goggle search for "graffiti removal 72 hours"?

The town of Burlington, Vermont has a paper titled "Graffiti Coordination/Community Outreach Worker Mission".  One of its statistics states "Research shows that graffiti removed within 72 hours has a 90% chance of not returning."  That fact is all the more reason to insist on graffiti removal in our community.

Robert Walker's internet site "Gangs Or Us" talks about gang graffiti and graffiti taggers.
Gang graffito, the singular of graffiti, is often the first indication that street gangs are active in your community. Graffiti is the newspaper, the billboard, the Internet of the world of street gangs and serves to mark the gang's power and status. Graffiti marks territorial boundaries and serves, as a warning to other gangs that the area marked with unique signs and symbols is the territory or "turf" of a particular gang. Graffiti warns intruders or trespassers from rival gangs and even policemen, that they are not welcome. It may also be an advertisement for the sale of drugs or a memorial to a fallen fellow gang member.

Graffiti should not be tolerated in ANY community. It frequently, if left in tact, leads to the degradation of a neighborhood and the devaluation of property. Studies have shown in many cases that if graffiti is left unchecked and not removed, more and more graffiti will appear. The removal of graffiti is extremely costly and some cities, that have developed graffiti removal programs, have spent huge sums of money to reclaim and beautify the neighborhood or community.

Most municipalities have codes or laws that deal with the defacing of property. Many have seen the need to pass laws that deal directly with graffiti perpetrators and many of these laws have severe penalties to deal with violators who are convicted. You can learn about some of these laws and ordinances by clicking here.

''Graffiti is a quality-of-life issue that needs to be addressed immediately,'' said Kathleen Gunn, the organization's executive director. ''Fortunately, we don't have that big a problem, partly because we have a lot of police presence here, but it's like the broken-window theory: when it does appear, it needs to be controlled.''


Gang graffiti is a weapon to put our community and police officers in harms way, no question about it.  Now is not the time to be playing politics with our children.  When the top crime fighter asks for help the community and council people should be supporting him, not placing their "political agenda" first.

Multiple property owners are usually in the business of renting.  Ms. Mope voted against a landlord/rental registration law in January, even after amendments were made to it.  It appears she supports landlords instead of the City she represents.  There are unanticipated costs in any business.

Gangs put drugs in the hands of our youth.  She should be more concerned with the needle in a chid's arm or the baby born to a heroin using mother than a $50.00 fine. 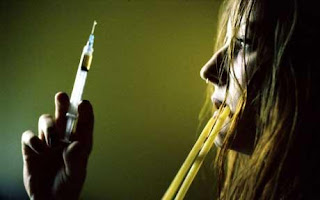 Of course obstructionism has no bounds.  There was no need to table an ordinance when it needs two more readings before passing.  It seems that tabling ordinances is the new game at further delaying the needed laws to protect Hazleton citizens.
Posted by McGruff at 12:40 PM No comments: