Hazleton Council Members With No Vision 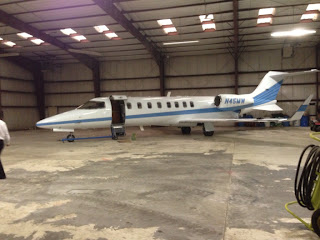 This picture shows the first tenant the City of Hazleton secured due to a new agreement with the Hazleton Airport hangar's owner.  A quick search of the FAA database shows the Learjet belongs to Eagle Rock Air, Inc. located in Dallas, Texas.  The owner is paying $150.00 per night to park the jet in the hangar.

In 2009, then citizen Jean Mope offered comments to Hazleton City Council on how valuable the airport to our community.  She handed out a study she did of the airport.

In an about face as a councilwoman Ms. Mope wanted to give the airport away according to this article that appeared in the Standard Speaker last year. Presented by Councilwoman Jean Mope on Dec. 5: Selling Hazleton Municipal Airport, which would result in the city having to repay all federal funds invested in the facility. If a sale is cost prohibitive, Mope suggested turning the airport over to either Luzerne County or CAN DO.

When the hangar lease came before Hazleton City Council on March 20, 2013 Councilwoman Mope changed her position once more according to this Standard Speaker article.  "I don't like getting rushed into making a decision," Mope said. "My thing is why always rush us into these things? Is it more feasible to look at other avenues, like maybe place a new hangar on there and see what it would have cost?"

The hangar is owned by Koro Aviation on land leased from the City of Hazleton.  Former Councilwoman Evelyn Graham's family are principals in Koro Aviation.  Councilman Jack Mundie, in his election mode, made this ridiculous assessment of the agreement.

Mundie referred to Russell Graham being listed in the agreement as a contact for Koro Aviation. Russell Graham is son of former city Councilwoman Evelyn Graham, who served as part of a council majority a few years ago that included Joseph Yannuzzi.

The key word was "majority".  It takes three.  Jack Mundie was the third person in that majority.  The pharisaicalness of his comments border on overt deception.

Neither council member is interested in what is right for Hazleton taxpayers.  In their ground game they are playing politics, pure and simple.  Their thirst for control seems to be quenched with their brazenness to treat their fellow council members with disdane and insults.  They fail to offer a vision for the direction of Hazleton with a long term fiscal strategy.  Rather than conduct meaningful dialogue their values allow them to excoriate the oppostion which is usually reserved for political rhetoric.

Both Mope and Mundie do the taxpayers a disservice through their sophistry.   They pretend they are concerned about issues when in reality that is the distraction to trick people from not seeing their real thirst.﻿
Posted by McGruff at 2:09 PM