What is Gene Stilp Hiding?


Gene Stilp, candidate for the 11th Congressional seat in Pennsylvania, is running of a record of requiring transparency in government.  The question for Mr. Stilp is does he talk the talk or walk the walk?


It appears as though he files by paper, delaying the public release of his reports – and disclosure of exactly who is financing his campaign – by as much as two weeks as the FEC scans and processes his snail-mail reports. Worse, it appears as though he refuses to provide this information when reporters  call to ask.


“Democratic opponent Gene Stilp, did not provide his campaign finance report to The Times-Tribune on Monday.”


“Efforts to reach Gene Stilp, Barletta's Democratic challenger, or obtain his report were unsuccessful. The deadline for filing the reports was Sunday, but the Federal Election Commission had not posted Stilp's report on its website by late Monday afternoon.”


“A report for Gene Stilp, the Harrisburg area activist and consultant opposing Vinsko for the Democratic nomination, was unavailable.”


Here are the records of his filings, third quarter still doesn’t appear: 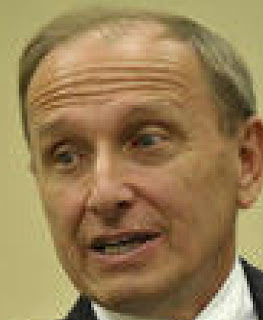 Mr. Stilp should answer the question since he squarely positioned himself as a crusader agasint government waste and corruption.

Some of his notable donations given his promise to be a crusader for the people is one from Emily Leader, attorney for the Pennsylvania School Boards Association, Mary Cassidy of Arnold & Porter which its many practices include representing pharmaceutical firm interests, Eugene Fleuish, no address listed, Douglas Phelps, no address listed, Carl Mayer, Mayer Law Group which among other specialties focuses on immigration issues, Holly Sebastian, Pennsylvania Department of Education, and a notable one for Pennsylvanians, John Passacantando of Our Next Economy LLC, an activist/envrionmenalist who is campaigns against the coal industry.
Posted by McGruff at 11:10 AM No comments: 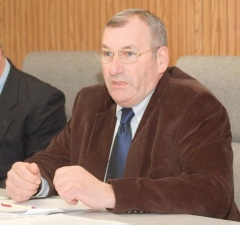 In this Kent Jackson article written March 7, 2012 in the Standard Speaker Ranson Young, candidate for the House seat in the 116th Pennsylvania district and presently Butler Township Supervisor, it is reported that Young is "suing the other two supervisors and the township to regain a job as road foreman from which they fired him in January."

In the federal lawsuit, Young says Supervisors Brian Kisenwether and Charles Altmiller fired him because he campaigned against them.

When Altmiller took office in January, he and Kisenwether formed a Republican majority. They fired Young and Caffray, who was zoning officer, at a meeting on Jan. 3.

Young says in the lawsuit that he received no notice that he would be fired before the meeting and was told no reason for his dismissal. In the lawsuit, he says he was fired in retaliation for exercising his right of free speech by campaigning. 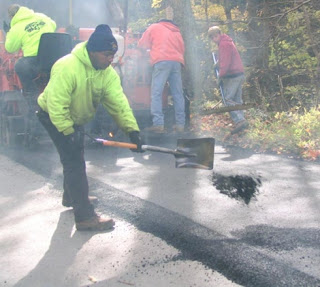 The caption to this photo reads "Asphalt from a shovel held by Luis Ocasio, who works for the Butler Township Road Department, falls to the surface of Mill Mountain Road, Butler Township. Behind him, Freeland Street Foreman Bob Babenko and Butler Township Roadmaster Ransom Young operate a spreader, while Terry Webster, of the Black Creek Township road crew, uses a rake to smooth asphalt from the side of the road. All three municipalities, including West Hazleton, work together on road maintenance and repairs to cut costs."

Back in 2010 this Standard Speaker article highlighted salary questions regarding Ransom Young's employment with Butler Township as a supervisor and a road worker.

Young was scheduled to receive $2,000 for his job as roadmaster, which is a supervisor position and was up for a 4 percent wage increase for being road foreman. Last year the roadmaster position paid $4,000. Young's salary, including the 2010 raise, would have been $49,429.38. Additionally, any supervisor that works on roads in the township receives $24.69 per hour."

According to these three Pennsylvania State Ethics Commission rulings it appears Ransom Young has a significant ethical issue regarding his dual employment by Butler Township.

In the matter of Richard Hessinger, supervisor for Summit Township, from 1994 the Pennsylvania State Ethics Commission ruled


Hessinger violated Section 3(a) of Act 170 of 1978 in 1988 and 1989 when he received double payment as a salaried roadmaster and as a laborer at an hourly rate for performing road related duties.

In another case before the Pennsylvania State Ethics Commission from the same year Thomas Wasiela, another supervisor in Summit Township, received a similar verdict.

Wasiela violated Section 3(a) of Act 170 of 1978 when he received double payment as a salaried roadmaster and as a paid laborer at an hourly rate for attending the PSATS's convention in 1988 and 1989.

Wasiela violated Section 3(a) of Act 170 of 1978 for receiving payment, at the hourly rate set by the township board of auditors for a working township employee, as to duties which were encompassed within the functions of elected township supervisors for the calendar year 1989.

In this matter involving Robert Noel, supervisor for Reade Township, the Ethics Commission found he committed a similar violation from 2004 through 2009.

Robert T. Noel ( "Noel "), a public official in his capacity as a Supervisor for Reade Township ( T"ownship ")f rom January 2004 to the present, violated Section 1103(a) of the Public Official and Employee Ethics Act ( E" thics Act "), 65 PSa.C.. 1 103§(a) , in relation to his actions as a Township Supervisor to approve and issue payment for hours claimed as a Township road worker at the same time he was serving asTownship Roadmaster.

Mr. Young should explain to the public in explicit terms whether the findings in these three cases applies to his role as Butler Township Supervisor, Butler Township Roadmaster, and Butler Township supervisor working on roads.  Did he approve payments to himself in all three of these roles? 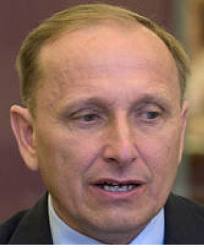 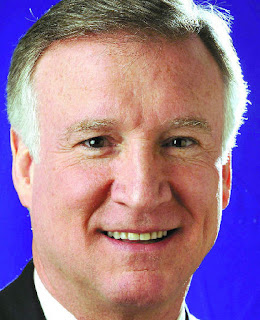 Kevin Blaum pens an opinion column for the Times Leader.  It is no secret that the editorial room of the Times Leader is  filled with some of the most liberal minds in the country.  Therefore it naturally follows that Republicans are not a welcome sight for their board.

Kevin Blaum opined in his latest column that voters should send Eugene Stilp to represent the 11th Congressional  District.  It is an almost unbelievable endorsement considering the issues Blaum addresses and his previous role on those very same topics.  Writing about Stilp he offers this perspective.

Best known for his work on a wide range of taxpayer concerns, Stilp is the proud owner of an oversized inflatable pink pig seemingly ubiquitous throughout central Pennsylvania.

Stilp's giant pink pig, coined Pignelope,  represents his perception of  government waste, fraud and corruption.  She comes in three sizes as well as a school bus painted pink which Stilp uses on his campaign trail traveling around the district.

One of the person's who exemplifies Stilp's cause against government waste is none other than Kevin Blaum.  Blaum was the architect of the  infamous"midnight pay raise of 2005" that Stilp successfully argued against before the Pennsylvania Supreme Court to stop.

“The giant inflatable pig became a symbol of greed and fraud in government and helped defeat many incumbent legislators in 2006 and 2008 who had voted for the midnight pay raise,” Stilp said. “The legislators were being hogs. They were giving pigs a bad name. The pig had to fight back.”

RocktheCapitol with a motto of "the price of apathy is to be ruled by evil men" published this paper on the "pay jackers" who benefitted monetarily from their actions at the expense of Pennsylvania taxpayers.

Blaum's role in this midnight pay raise was multifacted according to their publication.


Mr. Blaum voted for the pay raise, and as minority caucus secretary (the fourth highest-ranking party job) he was flown from Iowa to Harrisburg ($716) courtesy of Mr. DeWeese’s “leadership account” on November 7 to vote on the pay raise repeal.
(Herald Standard, May 12, 2006) Mr.DeWeese is incarcerated for his role in Bonusgate

“A car is a tool,” said Rep. Kevin Blaum, (D-Wilkes-Barre), who billed the state for a leased Ford Explorer and collected an average of about$1,500 a month in per-diems. “Certainly, no one is becoming rich off these expenses.” (Shamrock Times, November 13, 2006)
Per diems:

Retired from the legislature, but works as “Associate director for admissions at a private school (Wyoming Seminary).” (Sources: Patriot-News and The Associated Press)

In this report RocktheCapitol makes the point that Blaum was the recipient of a pension bump.

So the questions for Eugene Stilp comes down to this.  Mr. Stilp are you willing to acknowledge that Kevin Blaum was verifying you were right about the egregious acts against taxpayers?  Are you willing to reject Mr. Blaum's endorsement as a conflict of interest against the principles you claim to represent?  Or, is the showmanship on these issues just attention seeking manuevers to get you elected to some position in government?  We are still paying for the benefits Blaum gets as a result of his self ingratiating actions.

After all Gene this isn't your first trip to the rodeo.  Let's not forget your failed  attempt against Representative Sue Helm(R) in the 104th district.

Stilp is starting to look like Steve Urban,  wanting to run for any office hoping he gets something.

This press release was sent by Lance Stange Jr. of the Lou Barletta For Congress campaign. The Luzerne County Young Republicans will be holding its 2nd Annual “Youth in Politics” event on Sunday, October 21, 2012 from 5pm – 8pm at the Appletree Terrace at Newberry Estates.

We are honored to have District Attorney Stefanie Salavantis as our Special Guest Speaker.  She will be presented with the award of “Young Republican of the Year”.  State Representative Tarah Toohil, last year’s winner of the award, will make the presentation.


Tickets are $50 per person and can be purchased at the door.  Delicious food will be provided as well as an open bar.

Following politics for a long time one never knows how a race will turn out until election day.  Polls give each side its best guess but the data is only as good as the pollster.  I truly believe the polls in Ohio don't reflect what is actually going to happen election day between Romney and Obama.   Using 2008 election data to create the sample of voters will be the factor in that race.

Likewise I believe the senatorial race between Bob Casey and Tom Smith is alot closer than most believe.  This report from GoErie.com exemplifies the tightening in that race.

The Washington Post has moved the race from "solid Democrat'' to "lean Democrat,'' an indication the race is in play. But the newspaper said Casey is still the clear front-runner.

Casey estimates that his campaign has spent $11 million, but he said he must raise most of his funds while Smith can afford to write checks.

Smith acknowledges that he and his wife have spent millions of their own money, but he said he's been busy with successful campaign fundraisers, too.

As for the polls, Smith, 64, a former coal company owner, said the Philadelphia Inquirer survey is just one. "When you add them all up and you do an average, this race is tightening,'' he said.

I had very prominent Democrat tell me he is leaning toward Smith in this race.  I know one person doesn't make an election but it was a telltale sign that all is not what is seems to be on the evening news.

Their upcoming debate may have an impact on election day.
Posted by McGruff at 10:13 AM No comments: