Hazleton First To Combat Bath Salts: Its History Of Attacking The Problems 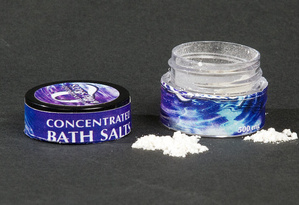 In today's Times Leader reporter Steve Mocarsky tackles the problems many towns and cities in the region are facing concerning the use of products masquerading as "bath salts." These products are designer drugs intended to create an effect on the human body.

Hazleton's Mayor Joe Yannuzzi and City Council are keeping up a record of attacking the problems facing Hazleton. Mocarsky writes this synopsis of Hazleton's efforts against bath salts.

Hazleton
City Council adopted an ordinance on March 23 based on ordinances the city clerk found in other states. It lists 11 chemicals that, if contained in the substances, would make them illegal to sell, distribute or possess within city limits. Violating the ordinance could be punished with a fine up to $500 and/or incarceration up to 30 days, with each day of violation constituting a separate offense.

Yannuzzi and Evelyn Graham were architects of many laws enacted in Hazleton to attack the problems the City has faced over the last several years. During his council term Yannuzzi passed the Illegal Immigration Relief Act to combat the influx of illegal aliens into Hazleton. 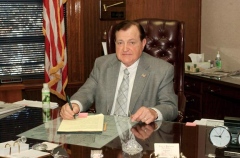 In 2007 Yannuzzi modeled a law restricting sex offenders from living withing 2500 feet of a school, childcare facility, park, community center or common open space after an Alabama law. He hoped to protect the children of the City with his ordinance.

Yannuzzi helped pass a dangerous dog ordinance in 2005 after attacked animals and humans highlighted the problem in Hazleton. At the same time he showed compassion for animals by providing the platform to start Bailey's Bark Park in the City.

Yannuzzi supported the mine reclammation project by Hazleton Creek Properties that provided the money to hire ten(10) full time police officers for Hazleton. The project remediates an abandoned mine site that has been severely impacted by past deep and surface mining practices containing over 277 acres of un-reclaimed abandoned mine pits and spoil piles. Portions of the site (approximately 50 acres) were subsequently used for disposal of municipal and industrial waste in several mine pits. His support helped put police officers on the street at a time when gang activity increased in Hazleton. 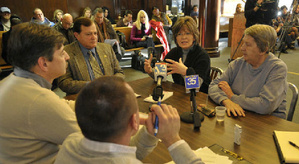 
“The community didn’t feel safe and we wanted to get everyone together to try to keep the city safe,” Councilman Chris Puza said.

Puza said he organized Wednesday’s roundtable meeting – which included city officials, City Council, Mayor Joe Yannuzzi and state Sen. John Yudichak and state Rep. Tarah Toohil – to discuss gang activity in the area and how the city should address it.

Investigators have said the January double-homicide in the city that took the lives of 21-year-old Vladimir Ruiz and 23-year-old Juda Hope was gang-related, which caused residents to worry for their safety, Puza said.

The roundtable was Puza’s response to those concerns.

It's going to be an interesting election season in Hazleton.
Posted by McGruff at 11:00 AM No comments: