Vinsko Never Was A Real Contender 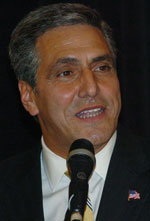 Last year my friend Gort reported on an email he received from Bill Vinsko's camp regarding his campaign fundraising efforts for the third quarter.  Even the D-triple C (DCCC) weighed in on the results, giggling with glee.   The headline read "DCCC, media tout Bill Vinsko among nation’s top challengers".  How another quarter can make a difference.

Incumbents in the 10th, 11th and 17th U.S. congressional districts have plenty of cash on hand to mount re-election bids entering this year, according to Federal Election Commission filings. Tuesday was the deadline for year-end reports to be sent to the commission.
The campaign for freshman U.S. Rep. Lou Barletta, R-Hazleton, reported $269,498 in the bank at year’s end. His campaign raised $146,978 in the fourth quarter and spent $101,803. The campaign also reported an outstanding debt of $85,102. Of that, $72,500 was in personal loans Barletta made to his campaign.

“Rep. Barletta’s campaign posted another successful fundraising quarter,” said campaign manager Lance Stange Jr. “Lou’s grassroots organization and financial support will allow him to start 2012 in a very strong position.”Of the two Democrats looking to unseat Barletta in the 11th District, only one had a functioning campaign last year and was required to file an end-of-year report showing campaign finances.

Wilkes-Barre attorney William Vinsko, who lives in the 17th District but is seeking the 11th District office, reported raising $20,574 and spending $34,580 so far. He started the year with $52,786 on hand.Vinsko said the first few months of fundraising have been successful but added that it “will really get into gear this quarter.”

Valenti pens these comments.  For those of you who think that a union just doles out $10,000 checks because they can, think again.
Unions are well organized and have a huge organization from the bottom to the top. You can book it that this particular union took a poll in Barletta’s new district and sees that Vinsko is within striking distance.

Considering this, it’ll be full steam ahead for Team Vinsko.

The Democratic Congressional Campaign Committee’s 36 Red to Blue races announced last week have already made quite a splash.

Getting onto Vinsko's federal campaign filings one needs to look at his campaign expdenditures.

No wonder he makes a great Democratic candidate.  He knows how to spend the money foolishly.  Someone should tell him he needs to bring at least $1 million dollars to the "race" party or stay home.

Oh..one more thing...Can somebody help Vinsko explain to the FEC why he needs those darn consultants.

This letter is prompted by the Commission's preliminary review of the report(s)referenced above. This notice requests information essential to full public disclosure of your federal election campaign finances. Failure to adequately respond by the response date noted above could result in an audit or enforcement action.
Additional information is needed for the following 2 item(s):

1. Schedule B supporting Line 17 of your report discloses reimbursements to individuals for expenses other than travel and subsistence. Please be advised that when itemizing reimbursements to individuals for goods or services, if the payment to the original vendor aggregates in excess of $200 in an election cycle, a memo entry including the name and address of the original vendor, as well as the date, amount and purpose of the original purchase must be provided. Please amend your report to include the missing information or provide clarifying information if memo items are not required. (11 CFR §§ 104.3(b)(4)(i) and 104.9, and Advisory Opinions 1992-1 and 1996-20)

BTW lets get back to Joe Valenti over at Pittston Politics.  Back in July Valenti opined in this blog post that this is the way Vinsko will make it to Washington.

There is one machine, however, that is still in place which is well oiled and runs like clock work - the District Justice network.

The one common denominator, both were a District Justice.

So, you’re probably asking yourself what the heck does this have to do with Bill Vinsko’s run for congress?

You see, Bill Amesbury was in Vinsko’s law office from 2003 until he won a spot on the bench. And, I’m sure Vinsko was quite supportive of Amesbury’s run for judge.
Now it’s time to return the favor.
So while you’ll see Lou Barletta spend millions to retain his seat or Paul Kanjorksi dip into his war chest to regain his seat, Bill Vinsko’s secret weapon is the District Justices which span far and wide touching every square mile through out the district – something money can’t buy.
That is a off the path assessment about how Vinsko will win this race because obviously it won't be with money.

Did anybody see the Titanic or the Costa Concordia??? 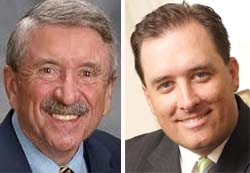 Posted by McGruff at 5:39 PM No comments: