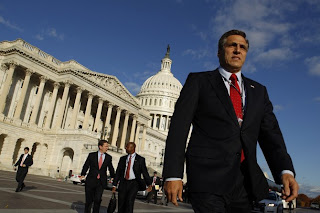 Statement of Rep. Barletta Regarding Senate Passage of Immigration Bill

WASHINGTON – Congressman Lou Barletta, PA-11, today issued the following statement regarding Senate passage of S. 744, the bill that claims to address illegal immigration.  The statement is as follows:


“It has been the worst kept secret in Washington these past few months that the Senate was determined to pass a sweeping immigration bill that in reality isn’t even a Band-Aid on our illegal immigration problem.  We have immigration laws for two main purposes: to protect our national security and to protect American jobs.  This bill violates both of those principles.


“I cannot support any legislation that does not secure our borders first.  While it is true that this means our southern, northern and maritime borders, it also means our interior ports of entry.  I fear that not enough people are talking about our visa system.  If you consider that nearly half of the illegal immigrants currently present arrived on a visa that has since expired, you will realize that if your state is home to an international airport, you effectively live in a border state.  As we have seen too often – and very recently – the holes in our immigration system represent a real and credible threat to the safety of Americans.


“If signed into law, this bill will greatly increase the number of newly-legalized workers in this country, who would then compete for scarce resources and jobs with legal immigrants and the 22 million Americans who woke up this morning unable to find a job.  Granting amnesty to millions of illegal immigrants would be a fiscal drain on the federal budget, the economy and legal American residents.  It will suppress wages, and cost taxpayers about $6.3 trillion in social benefits over the life spans of the new residents – even after tax receipts are realized – according to a study by the Heritage Foundation.


“I will oppose this bill when it reaches the House and anything that remotely resembles amnesty for illegal immigrants.”
Posted by McGruff at 4:20 PM No comments:

In his ongoing effort to convince Luzerne County officials to conduct a reassessment of properties Councilman Jack Mundie would cause Hazleton's tax millage to increase to make up for lost revenue according to Director of Assessment Anthony Alu.

In this Standard Speaker article written by Michael Buffer he reports that Alu stated  "A reassessment this year or next year would likely reduce assessment totals, and that could result in increases in property tax rates "to compensate for" losses in tax revenue for the county, municipalities and school districts".

It also would to force the county to spend about $300,000 to pay a company to review three years of sales data and devise a mathematical formula to compute new assessed values, Alu explained.

Mr. Mundie's proposal would do nothing to lower property taxes for Hazleton residents.  In addition Mr. Mundie cites research of selling home prices in his presentation that are questionable.  The housing market has been quiet in Hazleton.  To make a broad comparison on the effect to Hazleton's market a sizeable representative sample of sold homes for such a study would be needed to draw an accurate conclusion.  More than likely the homes he is citing include "distressed sales" resulting from tax sales or foreclosures.  Those figures aren't accurate for comparison.

His position is pure theatrics for the upcoming City Council election.  In the end his proposal would cause the millage in Hazleton to increase.  Hazleton is Third Class City.  As such, by current law, it can only tax properties up to 25 mills without going to court.

Hazleton reached 25 mills in 1972.  In 1977 it was forced to apply for an extra 5 mills to the Luzerne County Court.  That rate was in effect until 2008 which caused all kinds of financial problems for Hazleton, as well as many other third class cities.

His attack on reassessment can have a negative effect on persons interested in purchasing homes in Hazleton.  If they feel the value is going to be depressed, while an attractive buy, it can also deter sales because they may feel other markets have a much better chance for appreciation.

Frank Sorik has it correct.  Quote- "Frank Sorick, president of the Wilkes-Barre City Taxpayers Association, told council to hold off on another reassessment because he expects the state Legislature to outlaw property taxes."

Mr. Mundie's approach is designed to help himself, not the taxpayers.